It has been almost 2 weeks since our last update. So we really hope this post find you well

The past weeks prevent us from implementing non-combat system, at least that is what I expect to start doing. But instead, what we put all energy into is the combat system itself.In fact, this past weeks is the first time for Kumpol, our lead animator, that finally grab iPad 2 back to be used in testing along with the less of the team. There’re some reasons as the possession of that device cannot be made possible of his side, but it’s okay now. The good thing about this is higher perception on gameplay and elements that the game may miss or might need further. Of course, he takes responsibility in animating character, knowing in and out by playing the actual build helps a lot. The whole team playtested the game, exchanged and discussed feedback. Most of critical feedback came from Jirakorn and Kumpol which they were heavily discussed together closely, those perspective sent to me.

In the past, there’re some problems that cannot allow him to test the actual build with device. So the perspectives towards the game in real action came from Jirakorn, our producer, and me for most of the time. In those time, I solved the problem by recording video gameplay (a lot, nearly 20-ish videos since day one of development for every milestone we’ve reached) and spread it to the less of the team to review it and discuss about it, especially for member which has no devices at that particular of time. Right now, I would say, videos may be needed only when we want to show it to public and that is the case for this post as we will show you a first gameplay video!

Yes, that’s a gift for you guys. Please note that it’s still in *working-in-progress*, some elements are not in final stage just yet. We still have room for improvement. Anyway all in all, it’s what we can take and chew at the moment.

“Touch here” is meant for ultimate attack for players to touch and use it in combat. But we just leave it there as you can see in the video we really didn’t activate it. The reason is that we don’t want to expose too much information to hinder the excitement and fun in release version. But in any case you can recall from previous post for a frame of what we have done for the first type of ultimate attack.

It’s all about combat feeling and improving the gameplay experience so there’re no other major features implemented in this period. Major changes are listed below.

Aside from those, there’s one cocos2d-x framework bug which is about sfx getting cut off if the app is interrupted by phone call, display is closed, or an application is put into background and put it back again. Sometimes sfx won’t be played at all after that, the solution is to start the game over either by killing the app and starting it over, or going back to other screen then going back in. I’m going to try out solutions I found in cocos2d and cocos2d-x forum and see if it can resolve the problem. But will try with this one first.

I would say the animation handling is cumbersome and complex enough to make you scratch. Stopping all animations in one particular time can mean your character would go to freezing mode if not carefully done. If there’re lots of animation going on, and those are coming from several objects in the game, handling this kind of thing is tedious and you need to find the right approach (with some luck). Currently I’m suffered from this issue from time to time. I applied several fixes upon the approach I’m using to make it work, cache as many as action (CCAction) as you can to speed to creation process during run-time, and make sure a previous animaion which is no need anymore gets stopped as to prevent playing multiple animations resulting in flickering. So right now, I’m able to reduce the chance of flickering to *none* but I have to trade-in with side effect that is freezing. It’s rare to occur and since I’ve found this occurrence since last time I never found it again. The situation like this makes it harder to debug things to spot what’s the actual problem. I applied the workaround code with an addition to report me via Flurry if it can catch that the character is freezing and no animations (via CCAction) are left in its node. Of course, if it’s the case then it means the problem occurs again and let’s see if it can fix the problem.

My experience about randomly occurred bugs also happened once in really early stage of development. That time was about Kiki randomly disappeared then followed by other zombies. They were just gone but no crash. It turned out that the calculation is so right to lead it to this circumstance. Dividing by zero from floating-point calculation that is uncaught in kazmath library used by cocos2d-x v.2.0.3. Anyway that was history, and I fixed it already. The point is if things occur rarely and so randomly that you can’t even expect it. The high chance is because of similar situation I described. So beware!

Finally we have completed the process, and got confirmed from TGS that we will nail the booth space in this September. Another good news is that VISA application for Japan from Thailand is approved transparently by Japan government, so we don’t have to pouring in the process of application. This means much more time we would have to invest on the game itself. Ahoy!!

Good thing is Jirakorn, our producer, who is really in and out in Japanese culture and travelling already did searching for places to live there during our stay in Japan, it’s a good place. He planned for the team (Jirakorn and me will attend TGS) to be there during 18-25 September, that’s a week!  He said that the hotel is located near the convention holding TGS which can allow us for superb flexibility in commuting. We go there having a day preparation before the actual event starts, and then follow up from post-event with a couple of days further stay. He planned that the game should be nearly 80% or more in completion during that time. It’s possible, still possible.

Apart from the text overwhelming you above, the following is (not so) relaxing shot I would share with you again. But yeah, back in this post, I promised you to share a working desk shot from our lead animator, Kumpol. Anyway he’s re-inventing his desk and so busy making stuff, maybe I can constantly ask him to grab one and share it in future posts to come. 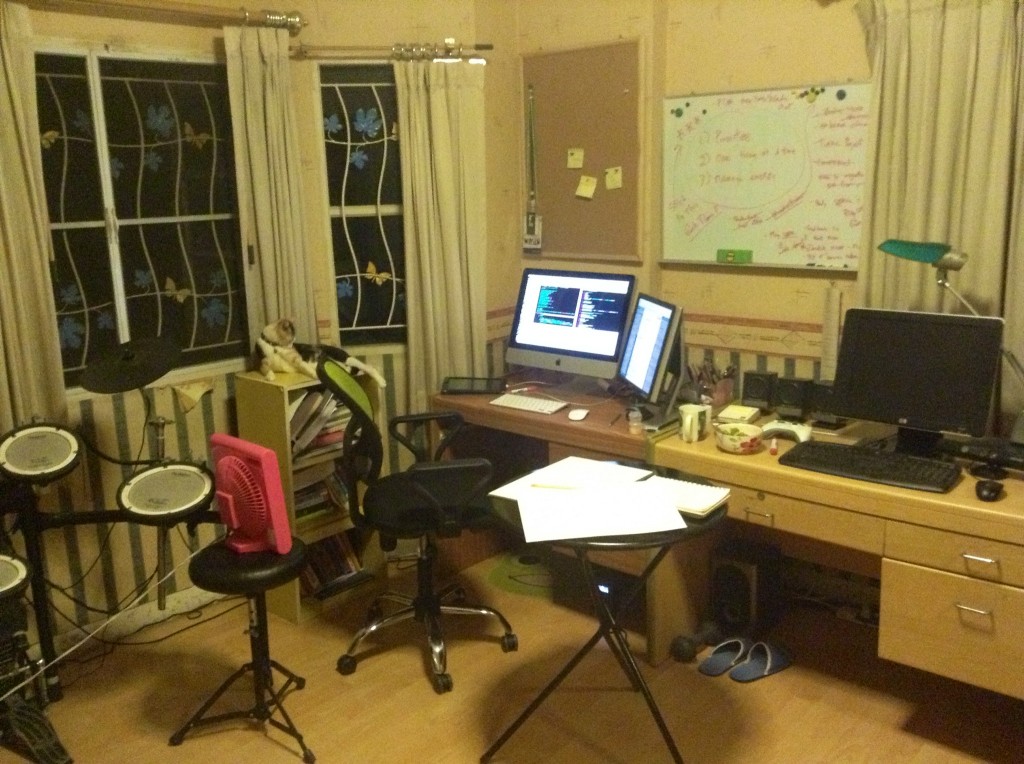 Our developer’s working desk at night

For what we have right now, combat feeling is better and more intense. This safely allows us to turn focus to other things for the time being. I’ve initially sketched things out about the overall game (via cloud) updating including save files, character upgrade in terms of attribute and combos, loading save game period and some other minor things I can chew at the moment. Possibly the architecture and design would have be more solid than the present stage. Bump it up below with 2 shots. 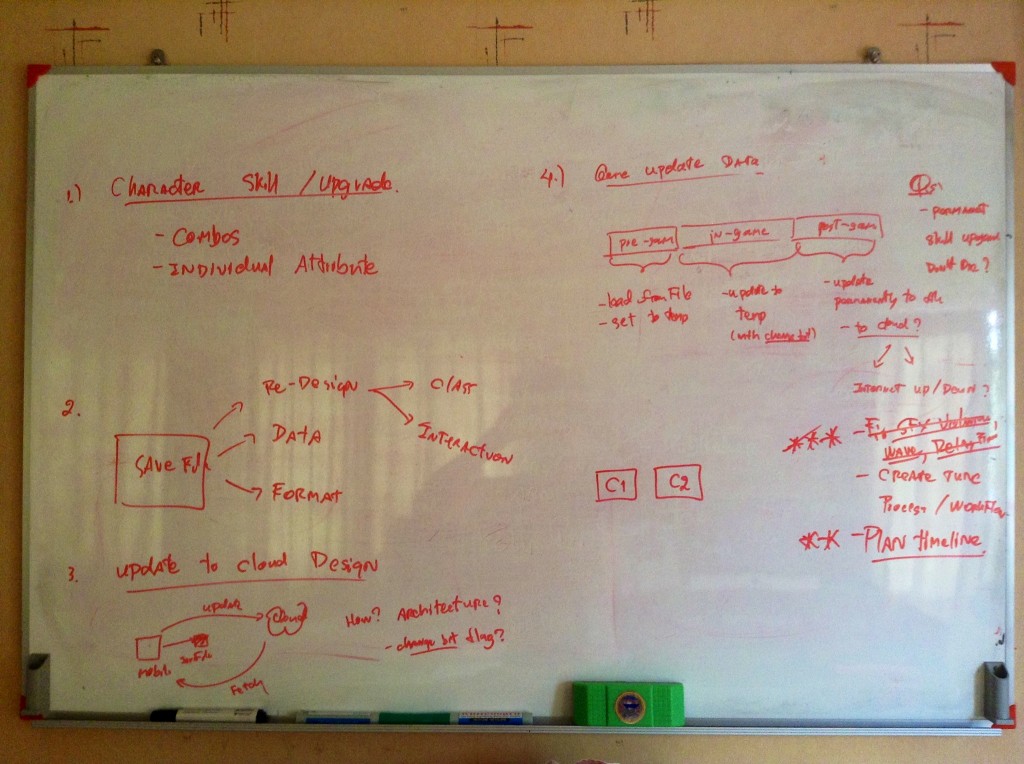 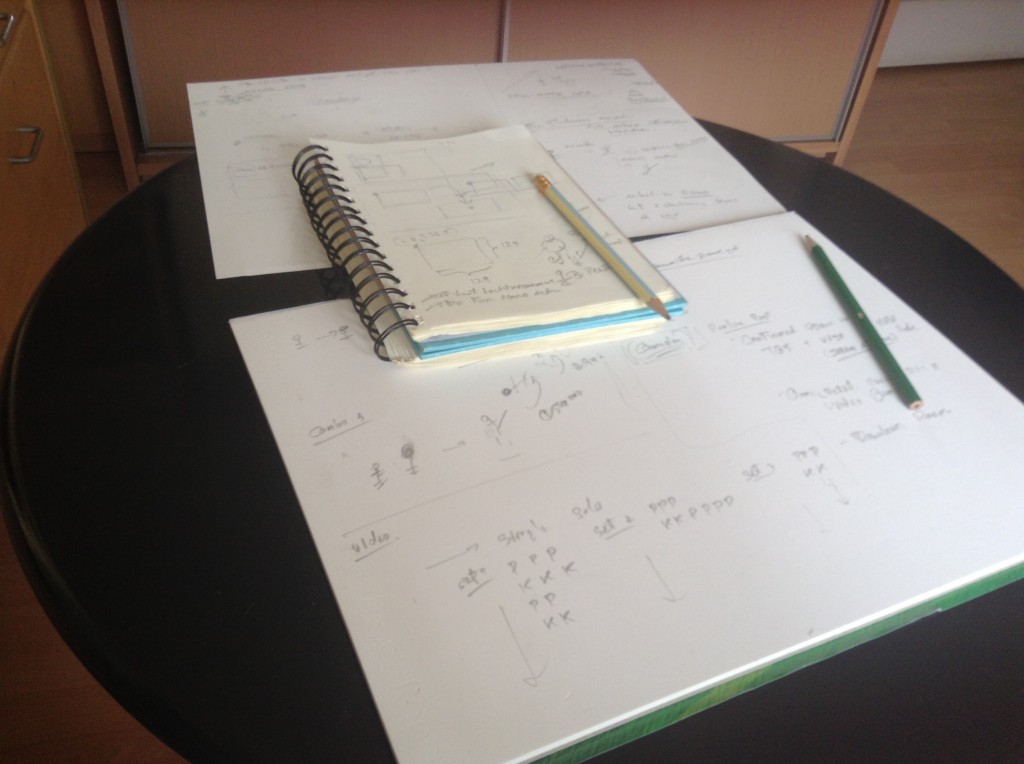